Cecil has died, and Alexis is now a grieving widow. The only person in the hospital to comfort her is Jeff. For all the power and wealth Cecil had, he only had two people that close to him. Alexis, who probably did marry him for the money and for revenge against Blake; and Jeff, the boy he raised who loved and hated him at the same time.

Even though she will not admit it, Alexis is very anxious to see what Cecil left her in the will. She seems overly obsessed about the reading of the will. When Fallon stops by to offer her condolences, Alexis finds it less than sincere and chastises Fallon for not wanting to attend the wedding and not telling her about L.B. Alexis accuses Fallon of only feigning concern because her mother is about to become a very rich woman. Fallon answers back she doesn't need Alexis's money - she has Blake's. 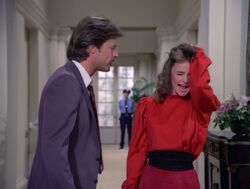 Meanwhile, Jeff wants Fallon to stay home and raise the child and fears that she will be away too much. Blake hopes Fallon tires of this endeavor and believes she is only doing it to make herself independent of Jeff. The only person on Fallon's side, somewhat, is Krystle, but Fallon is too pig-headed and distrustful of Krystle to appreciate that.

Fallon has big plans for La Mirada as she hires a set designer to re-do the entire place, to make it into a pleasure palace. The old guard at La Mirada, including the regular customers, may not like the change - but Fallon is going full force at it. While working, Fallon, once again, runs into Michael/Adam and he convinces her to have a drink. Fallon still refuses to give her name but it does not prevent her from mentioning that she likes to sleep naked... Michael/Adam is even able to steal a kiss, but Fallon leaves after that. 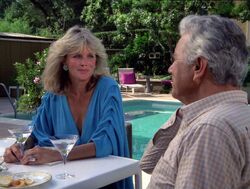 Michael/Adam is ready to leave Denver since he was rejected by Blake and could not find Alexis. Joseph is no help in helping Michael/Adam to locate Alexis. But Michael/Adam sees a news report on Cecil's funeral and the prospect that Alexis will soon become a very wealthy woman convinces Michael/Adam to remain in Denver.

Cecil has a surprise for Blake and Krystle at the reading of his will and wants the two of them to be there. Blake is game. When Krystle arrives early, Alexis accuses Krystle of having some sexual relation with Cecil and that she pursued Blake after Cecil rejected her. In return, Krystle accuses Alexis to have forced Cecil to marry her. The will is read. Cecil's cook gets $10,000 and a years salary. His executive secretary of 18 years, Katherine, gets $50,000. The rest goes to Alexis unless she fails to produce a Colby heir. In that case - she gets half and Jeff gets half.

Cecil's surprise for Blake is the tape of Blake yelling at Logan Rhinewood from the hotel room. Blake learns that Cecil is Logan and Cecil entrusts Alexis to finish the job of destroying Blake that he started. Of course, Blake believes Alexis is involved and the feud between the two is back on. 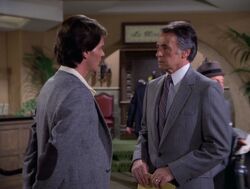 Alone, Alexis is angry that Cecil has put her in charge of destroying Blake. She cannot do it alone. Then she turns to see Michael/Adam, who tells the story of his kidnapping and how he might be Adam Carrington. He also tells Alexis that Blake rejected him and would not be surprised if she did so also. This time, Adam uses the silver rattle and presents it to Alexis. Alexis is too emotional to say anything but Michael/Adam gives her an out - to come visit him at La Mirada if she believes he to be her son.

Retrieved from "https://carringtondynasty.fandom.com/wiki/The_Will_(1982)?oldid=15185"
Community content is available under CC-BY-SA unless otherwise noted.