As the seventh season begins in September 1986, Blake stops short of killing Alexis, whom he had been strangling in the previous season's cliffhanger, after learning she had bought his mansion and was evicting him and Krystle. Claudia has died in the fire she set, and Amanda (now played by Karen Cellini following Oxenberg's firing from the series) is rescued by a returning Michael Culhane, Blake's chauffeur from the earliest seasons.

Blake turns the tables on Ben and Alexis and recovers his wealth, but loses his memory after an oil rig explosion. Alexis finds Blake and, with everyone believing he is dead, perpetuates the belief that they are still married. Living with a clean slate, Alexis finds herself softening to Blake, but ultimately tells him the truth as he reunites with Krystle.

Krystina receives a heart transplant but is later temporarily kidnapped by Sarah Curtis (Cassie Yates), the mother of the dead girl from who Krystina received her new heart; Sammy Jo's marriage to Clay Fallmont crumbles and she falls into bed with Steven; Amanda leaves town, and Ben's daughter Leslie Carrington (played by Terri Garber) arrives.

Adam's season-long romance with Blake's secretary Dana Waring (Leann Hunley) culminates in a wedding, which is punctuated in the May 6, 1987 season finale by Alexis' car plunging off a bridge into a river and the violent return of a vengeful Matthew Blaisdel.

Although the first episode of season seven premiered with a high neilsen rating of a 20.1, the competition with Magnum, P.I., now in the same time slot, and the constant storyline changes lead to Dynasty falling out of the neilsen's top 20 to #25. 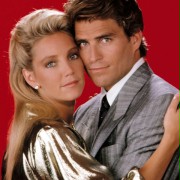 Add a photo to this gallery
Retrieved from "https://carringtondynasty.fandom.com/wiki/Season_7?oldid=14802"
Community content is available under CC-BY-SA unless otherwise noted.