Fallon returns to the police station in Los Angeles and tells the police that she remembers her names - Randall Adams.

In New York, Sammy Jo wants Rita to hear Krystle's voice and to mimic it. Then Sammy Jo wants her to wear a wig that will make her look like Krystle. 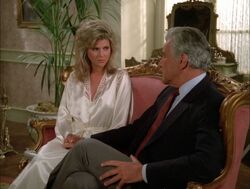 In Moldavia, Alexis tries to convince Amanda that she is being stubborn and that she should marry Michael even if he did have an indiscretion with Elena. Blake realizes there is something wrong when Amanda claims to be sick. Blake confronts Amanda and tells her she needs to grow up. Further, Blake questions Michael and Michael is so sincere in his story that Blake believes Michael is telling the truth and that nothing happened between he and Elena.

Elena herself tells Amanda that Michael did nothing with her. Even if something did happen, King Galen made it perfectly clear to Elena that she needs to tell Amanda that nothing happened. Amanda still is not convinced. Amanda does not re-agree to marry Michael until Michael catches Amanda stopping Dex from leaving and then gets into a fight with Dex. 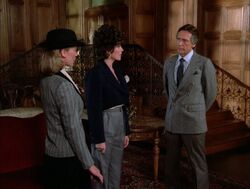 Dex is leaving because he caught Alexis and King Galen in a compromising position. Galen wants to be with Alexis, but Alexis has avoid his advances. That does not matter to Dex. He cannot believe he got himself wrapped up in this mess. As Dex leaves, he notices that it was kind of late for a wine delivery. Dex may know too much, so Yuri, head of security, knocks Dex out and has him tied up. Nothing is going to stop their plan.

Lady Ashley still has not given Jeff an answer to his proposal. Dominique tells Lady Ashley that she should go for it because it is rare for a man to want such a commitment. Commitment is not a problem for Jeff. Still, Ashley tells Jeff that she cannot marry him and that she will be returning to Paris alone. Besides, Jeff needs to go find his true love, Fallon.

Claudia does not appreciate Adam ignoring her just to make Blake happy. Adam assures Claudia that he very much loves her and wants both Claudia and Denver Carrington, even if Blake is not pleased with the pairing. Blake confronts Adam and tells him to end the relationship and Adam agrees. But Adam tells Claudia that Blake demanded the two end it but Adam stood up to Blake. 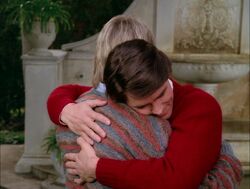 Steven tells Luke that when they get back from the wedding he is going to move into Luke's place with Danny and he does not care what anyone thinks. Luke is very happy and the two embrace.

The ceremony is interrupted by revolutionaries who decide the wedding is the perfect time for a coup d'etat. They are also horrible shots. Michael appears to get shot in the shoulder, the same with Galen. Dex, who has escaped, arrives a little too late but does manage a gun battle with Yuri, and the gun goes off but who was shot. The scene ends with everyone laying on the ground.

Retrieved from "https://carringtondynasty.fandom.com/wiki/Royal_Wedding_(1985)?oldid=16023"
Community content is available under CC-BY-SA unless otherwise noted.