Krystle was born and raised in Dayton, Ohio, together with her sister, Iris, and her working-class parents. She grew up to be a sweet, wonderful and extremely caring and loving woman, always putting other people's needs before herself. She married Mark Jennings, a tennis pro, unfortunately with a drinking problem, causing the end of their marriage. In 1978, Krystle attended a secretary job interview at Denver-Carrington. Blake was immediately fascinated when during the job interview he asked her what was most important to her, and she answered, "Life. Living life to the fullest."

Their love bloomed and they married in 1980, unaware of all the trouble and resistance their love was going to have to stand up to. It took a while for Krystle to find her place and get accepted in the "rich man's world" which she joined by marrying Blake. Her ex-boyfriend Matthew Blaisdel and her "romances" with i.e. Nick Toscanni and Daniel Reece are just a few of the things that have almost destroyed her marriage to Blake, but their love lasted through all the years of Dynasty.

In 1982, Krystle discovered that her divorce with Mark was not complete, so she and Blake had to remarry. Mark was killed in 1984, the same year as Krystle gave birth to a daughter, Krystina. Krystle went through both kidnappings, sickness and miscarriages, and in 1988, she got a brain tumor as a result from a fall seven years earlier. She's in a coma for a long time, but luckily woke up in 1991 (The Reunion) and returned to Denver. She's truly a gorgeous human being.

As Dynasty begins in 1981, Krystle is set to marry oil tycoon Blake Carrington, but receives an icy reception from both Blake's daughter Fallon and the Carrington majordomo, Joseph. She soon makes friends with Blake's sensitive son Steven, but her relationship with Blake is threatened by the advances of her married ex-lover Matthew Blaisdel and Blake's own volatile personality.

Their marriage is strained by her discomfort as she learns about Blake's ruthless side, especially in business. Blake rapes Krystle when she is reluctant to have sex with him. Later, Blake is arrested and charged with murder. Krystle must testify whether Blake has ever shown a violent temper. In the season finale, a mysterious witness enters the courtroom. Visibly agitated, Blake turns to his lawyer and asks, "What's she doing here?"

The mystery witness is Blake's ex-wife, Alexis. She testifies to Blake's violent temper. He is found guilty, but given a suspended sentence. Krystle also learns that she is pregnant. Krystle loses her baby in a horse riding accident. Blake suggests that Krystle meet with his friend, psychiatrist Nick Toscanni. Krystle suspects that Alexis may have caused her accident. She confronts Alexis, and the women have a vicious fight. Krystle feels alienated from Blake with Alexis around, and Nick tries to seduce her. Blake accuses her of having an affair with Nick, but Krystle has been faithful. Blake goes to confront Nick but does not return. Worried, Krystle goes to find him.

Krystle finds Blake and gets him to help. They learn that Fallon's son, his namesake "Little Blake" has been kidnapped. Blake and Alexis make a televised plea for the return of their kidnapped infant grandson L.B. Colby. While on the air, Alexis confesses a dark secret from their past: their firstborn son, Adam, had been kidnapped as a baby and never recovered. Traumatized by the event, they had hidden his existence from their subsequent children Fallon and Steven. Weeks later, an attorney from Billings, Montana, approaches Blake and claims to be Adam. Blake does not believe him, but eventually accepts him as his son - especially when Alexis does. Krystle tries to help Adam and Blake form a father-son relationship.

Krystle learns that her divorce from her first husband was never official when he comes back to Denver in the hope to have her back. Not long after Steven is missing and presumed dead, his ex-wife, Sammy Jo, (who is also Krystle's niece) appears with a baby that she says is Steven's. Blake and Krystle offer to keep the child. When Steven returns to Denver, alive, Krystle is heart broken to give up little Danny. In the third season finale, Krystle meets Alexis at a remote cabin. As the women fight, they are horrified to see flames surrounding the building!

Krystle and Alexis are rescued by Krystle's ex-husband, Mark. A few months later, Blake and Krystle remarry. Krystle goes to work for Denver-Carrington in PR, much to the dismay of Tracy Kendall who was hoping to get the job herself. Tracy pretends to be Krystle's friend, but secretly decides to seduce Blake. Krystle figures out her true motives and sends Tracy packing.

Krystle has a baby girl, whom she names Krystina. Although Krystina is fragile at first, she survives and thrives. Krystle encounters a man from her past, Daniel Reece. He turns out to be Sammy Jo's father. Blake grows jealous of their friendship. Daniel is in love with Krystle, and they kiss. Meanwhile, Lady Ashley Mitchell attempts to seduce Blake. Someone has photos taken of both Blake with Ashley and Krystle with Daniel and has them sent to each other. However, both Blake and Krystle declare their love for each other. When Amanda falls in love with Prince Michael of Moldavia, Blake's entire family joins him for the wedding. Unfortunately, rebels storm the wedding and spray the chapel with bullets.

Blake and his family survive the attack, although Steven's boyfriend and Lady Ashley Mitchell are killed, while King Galen is badly hurt. Upon returning to Denver, Krystle goes to visit Sammy Jo and is shocked to find a woman who looks exactly like her! She is knocked on the head and held hostage by Joel Abrigore, while the look-alike, Rita, impersonates her. Joel becomes obsessed with Krystle. Eventually, Sammy Jo releases Krystle, who then has a cat fight with Rita. When the truth is exposed, Rita disappears and Krystle returns.

In the season finale, Krystle and Blake learn that Alexis has bought their house with the help of Ben Carrington (Blake's brother). Furious, Blake grabs Alexis by the throat and starts to strangle her.

Krystle pulls Blake off of Alexis. Blake learns that his hotel, La Mirage, has burned down. A grief-stricken widower blames Blake for the fire and forces Blakes car off the road. Krystle is severely injured, but recovers. Blake is charged with arson, but eventually the charges are dropped. Blake, Alexis, and Ben are in southeast Asia visiting an oil rig when it explodes. Krystle arrives on the scene only to learn that Alexis has taken Blake out of the hospital. When she finally discovers them, Blake doesn't recognize her. Heartbroken, Krystle prepares to return to Denver. However, moments later Blakes memory returns.

Blake and Krystle's daughter, Krystina, falls ills and needs a heart transplant. A donor is found, Krystina is fine, but the donor's mother kidnaps Krystina. However, she is found unharmed.

After several days in captivity, Steven stabs Matthew and the family is freed. 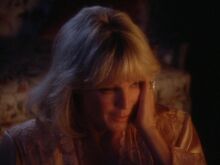 Blake runs for governor against the incumbent and Alexis running as an independent. Krystle takes an active role in the campaign, including researching the sudden death of Alexis' second husband Cecil Colby. Although she doesn't have hard evidence, she has enough to cast doubt on whether Alexis murdered her husband. She threatens to leak her story to the press if Alexis doesn't stop spreading lies about Blake. Alexis complies. Despite their best efforts, Blake loses.

Not long after, he returns home to find his bedroom trashed and Krystle missing. He cries out: "Oh, Krystle, I thought we had more time!"

Krystle has a serious brain tumor and must have risky surgery. They fly to Switzerland, where the surgery is successful but Krystle is left in a coma.

Three years later, Krystle has recovered from her coma, which is revealed to have been medically induced to allow an evil international consortium to brainwash her into killing Blake. A sympathetic nurse helps Krystle escape from the clinic and return to an overjoyed Blake. When her "programming" kicks in, she pulls a gun on Blake, but their love is too strong and the plan fails. 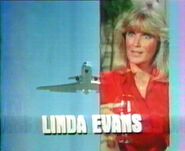 Linda Evans' credit for the rest of season 1

Linda Evans' credit for seasons 3 to 7

Linda Evans' credit for seasons 8 and 9 and The Reunion 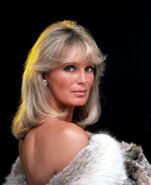 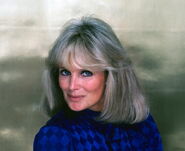 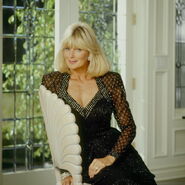 Photo shoot for The Reunion

Photo shoot for The Reunion 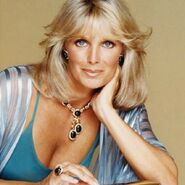