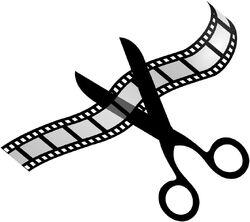 A deleted scene is a filmed segment of a movie or television episode which was removed from the final product for any of a number of various creative reasons. Whatever that reason, the scene was good enough to advance from the writers to the actors to the cameras. Among the most common reasons for a scene to be deleted are time constraints (a scene could make the episode run too long) and narrative pace (a scene could slow down action of the story). In both instances, whole scenes as initially scripted could be taken out, or scenes could be shortened without being entirely removed, in which case the sometimes used expression "trimmed scene" is the more applicable one.

A deleted scene could also be replaced with another scene, in which case the scene deleted becomes an "alternate scene." A scene may also be merely trimmed down, again either for time or pace. In this latter scenario, the full version of the scene is known as an "extended scene."

At many times, these scenes give a more detailed exposition of a plot point and since they provide additional plot points or exposition, deleted scenes are usually considered canon, unless they are contradicted in the published scenes of an episode.

Some of the deleted scenes are eventually made available to the public by adding them as special features for home video releases (not in the case of Dynasty and The Colbys unfortunately).