After Adam's return to the Carrington family, one should think that Blake had now all his children gathered in Denver. But no, Alexis had managed to fool him when she left after the divorce. She was pregnant, and in April 1965, Amanda was born. Alexis placed her daughter with her cousin Rosalind (by blackmailing Rosalind's husband Hugh Bedford) in England, and let the girl grow up believing she was Amanda Bedford. Alexis made sure Amanda was taken care of and visited her often, but the fact that she was her mother was kept as a secret. But in 1984, Amanda got to know the truth and moved to Denver and like Adam, she was, after a bit of fuss, welcomed in the Carrington family.

Amanda was pretty much a nice girl, and also very beautiful, but she showed definite signs of being a "rich daddy's spoiled girl" a number of times, and she could be very difficult to handle. She fell in love with Prince Michael of Moldavia in 1985, and by marrying him, she became a princess. But the marriage turned out to last for a rather short time, and they divorced in 1986. The next love in Amanda's life was her own step-father, Dex Dexter, but this was also a mistake. She also had a short affair with Michael Culhane, Blake's former driver, but after this, Amanda eventually got sick of all the hate and intrigues going on with the Carrington family, so she left Denver in about a year after her divorce. 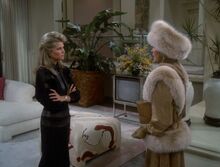 Close on the heels of Fallon Carrington's disappearance and presumed death in a plane crash, a young woman named Amanda Bedford appears in the penthouse of Alexis Colby, Fallon's mother. Raised primarily by Alexis' cousin Rosalind Bedford, she is Alexis' daughter, come to Denver from England to give her mother support after Alexis' recent arrest and acquittal for the murder of Mark Jennings.

As news of Alexis' "new" daughter spreads, ex-husband Blake takes a special interest, soon learning that Alexis had been pregnant when he had exiled her from Denver almost two decades earlier. Though Alexis insists that Amanda's father is a ski instructor with whom she was involved, it is eventually revealed that she is indeed Blake's daughter and that Alexis kept her hidden from him as revenge for being banished years before. 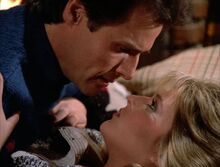 Amanda is attracted to Alexis' fiancé Dex Dexter, and attempts to seduce him. When they find themselves snowed in together in a remote cabin, they give in to their feelings and make love. Immediately afterwards, Dex regrets his actions and announces that he and Alexis will marry.

Sullen and depressed, Amanda is invited by Blake to a conference in Acapulco, where she meets the handsome Prince Michael of Moldavia. Alexis, who had known Michael's father King Galen years ago, encourages the relationship. Amanda learns that Michael is engaged to Elena, a Moldavian duchess, but he assures Amanda that it had been a loveless match. Michael proposes and Amanda, despite her lingering feelings for Dex, accepts. 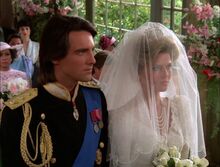 During their engagement, Amanda is almost kidnapped by Moldavian rebels but rescued by Dex. In the 15 May 1985 season finale "Royal Wedding," the rebels undertake a large-scale coup, interrupting the wedding in an attempt to kill Galen. Terrorists spray the chapel with gunfire, leaving the entire wedding party seemingly dead or dying on the floor. 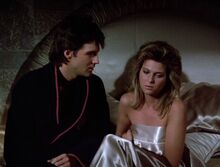 Amanda, Michael and the rest of the Carrington family survive the attack, though Luke Fuller, the gay lover of Amanda's brother Steven, and family friend Lady Ashley Mitchell are killed. King Galen is missing and presumed dead, and rightful heir Michael is forced to leave the country.

Exile, however, puts a strain on Amanda and Michael's marriage, as he and Alexis become obsessed with rescuing Galen (who is being held for ransom) and restoring the monarchy. Amanda and Dex are drawn closer as Amanda catches Michael and Elena in a compromising position and Dex catches Alexis with a crown, imagining herself as Queen of Moldavia. Amanda finds a drunken Dex and they make love again — only to be caught in the act by Alexis. Alexis and Dex divorce, as do Amanda and Michael. After Alexis discovers that King Galen has in fact been manipulating her, the Moldavian royal family leaves for Lisbon and is never heard from again. 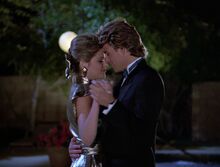 Amanda is devastated when Dex does not want to pursue a relationship with her. She romances Clay Fallmont but their family rivalry drives him into the arms of Steven's ex-wife Sammy Jo. Amanda is involved in a drunk driving accident which is covered up by Blake; estranged from her mother and feeling isolated from her family, Amanda eventually attempts suicide. She survives, and reconciles with a forgiving Alexis. Amanda decides to pursue Clay again. In the 1986 season finale episode "The Vendetta", Sammy Jo catches Amanda and Clay kissing at the La Mirage hotel; the women fight, winding up in the swimming pool in their party dresses. Meanwhile, Amanda's sister-in-law Claudia Carrington accidentally sets the hotel on fire. 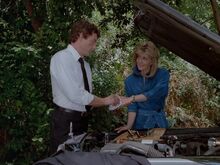 In the seventh season premiere episode "The Victory," Amanda is trampled in the chaos surrounding the fire but rescued by a mysterious stranger. He turns out to be Michael Culhane, her father's former chauffeur who had been fired (and beaten up by Blake's thugs) in the first season for having an affair with Fallon. Now grateful to Michael, Blake offers him his job back, but is no happier than before when Michael and Amanda begin dating. Amanda is warned about Michael by sister Fallon, but refuses to leave him. Eventually, an upset and confused Amanda learns that Michael has become wealthy and is using her to get to Blake, and she is last seen in "The Rig" on 7 January 1987. In "The Portrait," Blake offhandedly explains to Michael that Amanda has returned to England "to think." The character never appears or is mentioned again during the series.

Catherine Oxenberg's credit for seasons 5 and 6 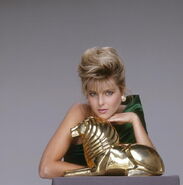